In honour and celebration of World Oceans Week, a ceremony open to the public will be held tonight along Merewether Beach.

The ceremony and in conjunction with World Oceans Day aims to bring awareness and support against the continual seismic testing and offshore drilling planned off Newcastle and the Central Coast.

With oil and gas companies still trying to test off the coastline of Newcastle, marine life such as whales and dolphins passing through are being affected by the constant stream of chemicals.

Countless amounts of peer-reviewed research articles have shown that underwater blasting is partly the cause of injury and death to surrounding marine life, while also impairing communicative abilities between dolphins and whales in particular.

The World Oceans Day get-together will be held between 5:00pm and 6:30pm, outlining the event as a twilight lantern ceremony, bringing the community together in support of the peaceful future of our marine life and that physical state of the coast.

All attendees have the chance to make their own lanterns by decorating their own paper bag, which will become available with a candle following a gold coin donation.

Earlier on in the evening, face-painting will be on offer for the kids, ocean-themed of course, and the opportunity to wander through eucalyptus-scented smoke following a traditional fire ceremony. 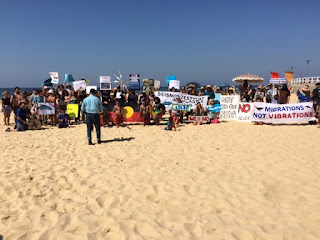